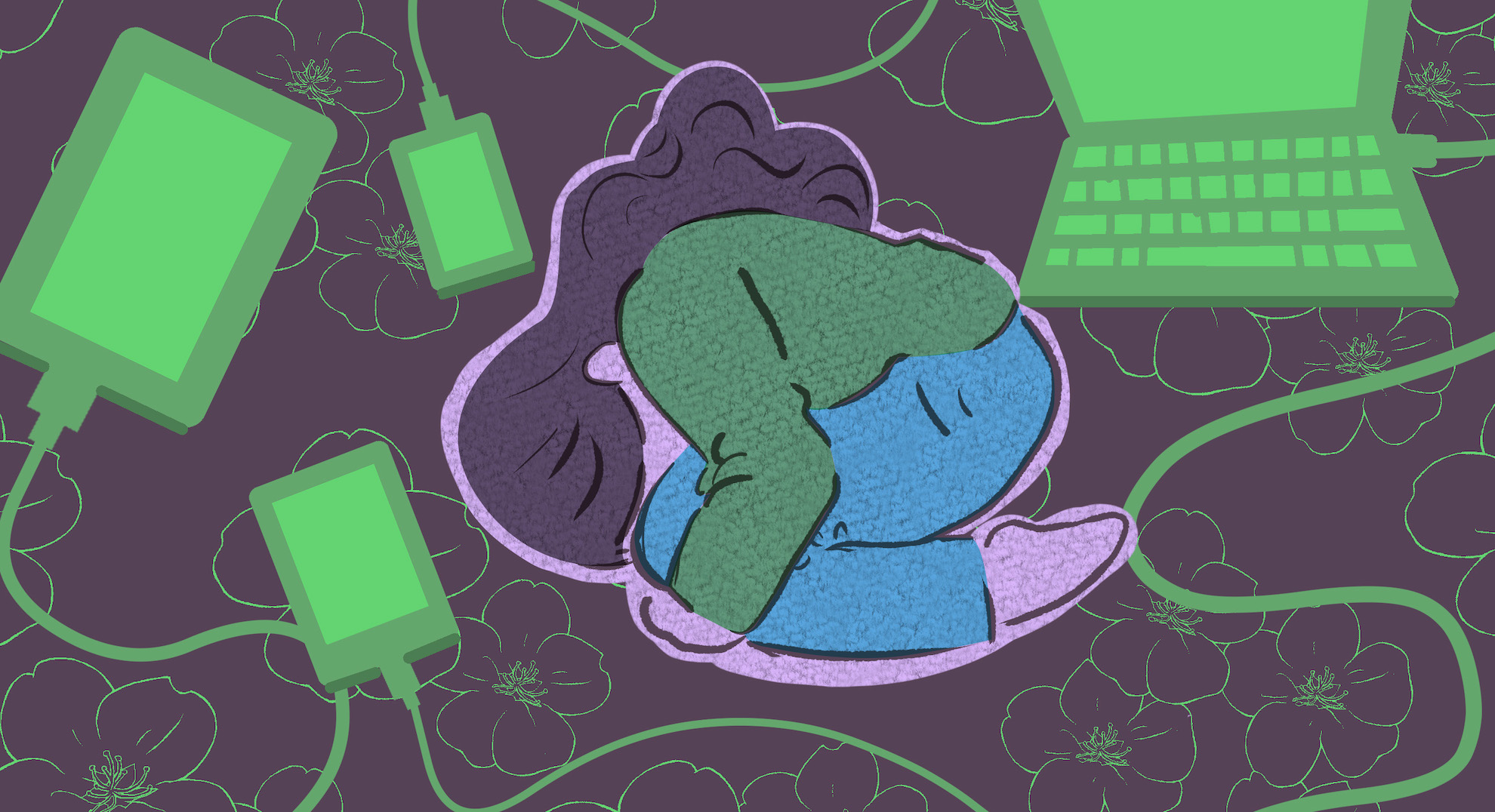 Doomed by scrolling: Students can’t look away from social media

Yalda Safwar says she initially saw an uptick in her screen time when she was in high school in the late 2000s, citing peer pressure to get online and join Myspace, MSN and Facebook.

But as time went on, Safwar found use of the new technology and started using social media platforms as a channel to stay in touch with her family and friends, in addition to staying up to date with the news cycle.

As an Afghan-Canadian and now second-year journalism student at Seneca College, Safwar uses social media to connect with her homeland. However, she often finds herself spending hours upon hours reading disheartening articles. She says she feels drawn to them because of the humanitarian crisis taking place and her natural curiosity as a journalist and self-proclaimed "news junkie."

In August, the Taliban took control of Afghanistan after U.S. military forces withdrew from the country, causing thousands of deaths and displacing millions of people. Safwar says this kept her glued to her screen and on social media and she felt as though it was, and still is, her duty to constantly be informed.

“When you’re pursuing journalism, you’re supposed to be [in] the know and on the go 24/7 on social media,” Safwar says. She added that she would make excuses for the time she spent scrolling online, prioritizing building her network as an up and coming journalist instead of her school assignments, work and family.

However, in her first year of college in 2012, Safwar noticed she was falling into a pattern of "doomscrolling," which in turn negatively affected her academic performance and took a toll on her mental wellbeing. She says she tries to find a balance between her responsibilities and screen time, but struggles to do so.

According to the Merriam-Webster Dictionary, the term ‘doomscrolling’ refers to the act of continuously viewing news feeds on social media even if the content causes distress, with no ability to stop.

Ramona Pringle, an associate professor at Ryerson’s RTA School of Media, says that social media platforms enable doomscrolling because they're designed to be never-ending, comparing the phenomenon to quicksand.

“The deeper in you get, the harder it is to pull yourself out.”


Though Pringle says she understands the feeling of constantly having to be online because of students’ employment or constantly wanting to be informed, she says it shouldn't be at the detriment of their mental health or completing necessary tasks.

“There is this culture of always being connected and always being on. And I'd argue that it's not necessary, even when it is your career,” she says.

When Safwar finds herself wanting a break from her phone, she says she plays board games and watches Christmas movies and TV shows with her family.

“Sometimes to get my mind off of wars and the ugly realities of our world, I’ve just leaned onto the reality of Kim Kardashian and her family,” Safwar says.

Post-secondary students and recent graduates say they recognize they’re doomscrolling for a variety of reasons. Some say it's because their careers involve staying active online, some get bored and use the platforms to keep themselves busy, while others doomscroll to distract themselves from work or school.

For Maverick Sleep, the term "doomscrolling" is something he's been familiar with for at least five years.

The RTA sport media graduate says he first noticed he was spending too much time on social media when he started at Ryerson in 2016.

“I always found I doomscroll or [excessively] use social media...scrolling for long periods of time with no real purpose,” Sleep says. “It’s mostly out of boredom, but it’s also just me struggling for any type of human interaction.”

Sleep adds that he finds it difficult to break out of the habit as he wants to catch up with current events, especially amidst the pandemic and increasing political and racial injustices.

RELATED: To be young and online

Sleep also recalls seeing an increase in his procrastination levels when it came to school assignments, which he attributes to doomscrolling. According to a 2015 study in the Journal of the Canadian Academy of Child and Adolescent Psychiatry, high screen time was associated with poorer mental health and academic outcomes.

Pringle compares this notion of doomscrolling to the idea of “digital rubbernecking.” This happens when a social media user witnesses something bad going on in the world, but they continue scrolling because they can’t look away.

“It’s kind of the perfect storm; that you're turning to these platforms to get a certain human satisfaction of seeing and being seen,” she says.

"It's really, really hard to just unplug, to just quit."

Pringle emphasizes that doomscrolling can take a mental toll on users regardless of age. “You’re being bombarded by all of this, and yet it’s really, really hard to just unplug, to just quit.”

In order to reduce his screen time, Sleep would schedule time for social media during his study breaks or do something else that would keep him from going on his phone, such as completing house chores, cooking or going on walks.

Since graduating, he says the pandemic only worsened his doomscrolling habits because he’s been forced to stay indoors, leaving the internet as his social lifeline for human interaction.

Sleep calls his doomscrolling practices a “double-edged sword” because while he searches for social interactions, he also finds things that upset him. He says he’s drawn to social media regardless, to find a sense of “clarity” or “satisfaction.”

Similarly, OCAD University student Krystina Levitski says she finds satisfaction when scrolling through social media, particularly on TikTok. She says watching the shorter videos makes her feel like she is completing a task while she distracts herself from other responsibilities and assignments.

According to a 2020 study titled, “Neurotransmitter Dopamine (DA) and its Role in the Development of Social Media Addiction,” scrolling through social media content can quickly become an addiction due to a “feedback loop” related to the release of dopamine.

The study says dopamine is released when users regularly check their phones for notifications that could be positively stimulating or rewarding. Dopamine is a chemical in the brain that plays an important role in executive function, motor control, motivation, arousal, reinforcement and reward, often linked to happiness as well as forms of addiction.

"I just sadly look at my screen time and I get really disappointed in myself.”

When dopamine is released based on positive stimulation obtained from social media, users are sucked into the feedback loop and keep scrolling.

Apple allows its users to limit their screen time manually by setting controls on certain apps. At the end of every week, the Screen Time feature sends a report to the iPhone user that provides them with a breakdown of the time they spend on each app, each day.

Levitski recognizes that doomscrolling has become an addiction and says she has tried several different methods to limit her screen time. This includes getting her boyfriend to set a passcode when limiting screen time on certain apps, to prevent her from increasing her scrolling time. However, she says she even wants to scroll when she and her boyfriend are watching TikToks together on his device.

“It’s definitely a weird experience because it’s pretty much an addiction, it’s like you’re getting secondhand scrolling,” she says.

Levitski says she’s also deleted social media apps to prevent herself from doomscrolling, but she just ends up redownloading them.

“I just sadly look at my screen time and I get really disappointed in myself.”

Pringle explains that the continuous scrolling feature was built by these social media platforms with intent.

"These platforms know what they're building is addictive," she says. "They also know that they're addictive to the detriment of the mental health of especially young people."

Pringle adds that users are also constantly comparing themselves to those on social media and thus it is difficult for them to escape from both the bad news and the "perfect" lifestyles that pretend to be authentic.

"And yet, it's really, really hard to just unplug, to just quit."